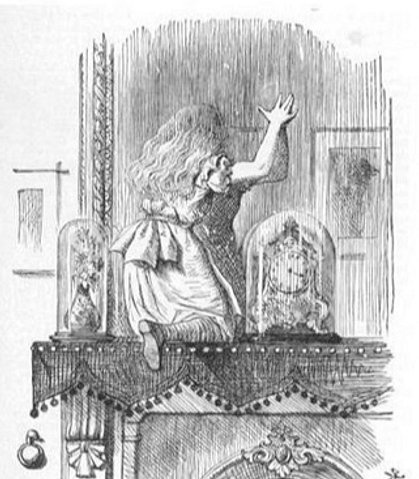 Let’s pretend the glass has got all soft like gauze, so we can get through”[i] says Alice in Lewis Carroll’s novel ‘Through the Looking-Glass, and What Alice Found There’. What is the world beyond if we penetrate through the surface of the mirror? Alice ponders on what exists if we go through the membrane of our reality. If we reflect upon ourselves - and go a step further. What is the alternative, other world that exists through the dreamlike translucence of glass? A material that has been known to humankind in its natural form of Obsidian since 75,000 years BC.

Curiouser and curiouser, this volcanic glass formed from quickly cooled lava was also used for mirrors in ancient times. In studies on Mexican civilisation, looking into obsidian is described as ‘mirror-travel’[ii], specifically used to see into the future. It’s both ancient and futuristic. Used to see beyond the visible and into the unknown, just like Alice’s looking-glass.

One of these obsidian Mexican mirrors was brought by Cortes to Europe and ended up in the hands of Elizabeth the 1st’s alchemist, astrologer and mathematician, John Dee[iii]. Using this spirit or ‘scrying’ mirror as a psychic device, Dee worked with mediums to receive communications from angels and spirits, for capturing the devil, for divination and occult investigations.

But, I’m getting ahead of myself.

The earliest known man-made glass originates from Ancient Egypt, about 5000 years ago and is one of the most important inventions ever made. From an alchemical process glass was developed and then in turn used for alchemical experiments. ‘Glass is the key to the exploration of our world’[iv] – and the world beyond. From Galileo looking through ground lenses to view the solar system, to Hooke magnifying the miniscule through a microscope[v]. ‘To see the world in a grain of sand’ wrote William Blake[vi]. Meanwhile Newton looked at the refracted spectrum using a glass prism to understand light, and in turn colour. Looking out, looking in and looking beyond. Glimpsing the unknowable, connecting to the invisible.

Centuries after the Greeks rubbed amber to get electric shocks – the stone somehow alive with the power of god - scientists discovered that by rubbing glass with wool, a static charge is created. Driven by the urge to communicate with the beyond, to reveal spirits and to manifest the invisible, electricity was discovered using glass.

When lightning was still thought of as supernatural, Benjamin Franklin invented a lightning rod to direct the electricity[vii], but it was a glass bottle that captured this devil. Nature was said to be tamed. The wrath of god brought under the control of man. Franklin wanted to rid the world of false idols and thought society slaves to magic. However, rational explanations for universal energies did nothing to quell the urge to explore the world beyond, or examine psychic phenomenon. Most accounts of spiritualism begin with two women, the Fox sisters, and communication with spirits continued to be a realm where women had a dominant voice[viii].

And in order to capture the spirit phenomena, these transmissions from another world, glass plates were used in the photographic process to create a mirror-like representation of reality of the gauzy ectoplasm like the permeable gauze of Alice’s mirror.

So, from the very beginning glass was used as an efficacious device to see into those parallel dimensions, to summon those spaces we cannot know. It was recognized as beholding an intrinsically visionary quality along with the supposed ancient magic and therapeutic properties similarly attributed to crystal and precious stone.

Aldous Huxley wrote that certain classes of objects and materials possess ‘the power to transport the beholders mind… towards the Other World of Vision’[ix].

Huxley describes that a characteristic common to virtually all the heavens and fairylands of folklore and religion is that paradise is rich with gems, or at least gem-like objects. Just as in the New Jerusalem, similar descriptions can be found in the literature of Hinduism, Buddhism and Islam. In the heavens of the Celts and Teutons, gems are replaced by glass.

Huxley noted that ‘Gems come from the soul’s visionary heaven; but they also lead the soul back to that heaven [and] the same effects may be produced by artifacts of glass and metal.’[x]

So apparently, their transporting power is manifest, they are genuine talismans.

In the same moment that the Mexicans – or rather, Pre-Columbians were mirror travelling they were also ingesting psychoactive substances such as peyote to enable their access to other dimensions. They were journeying into what Huxley describes as the ‘mind’s antipodes’. His research, some firsthand, found that there’s a commonality to these psychedelic experiences and that is the perception of coloured living geometries and the experience of light. ‘Everything seen by those who visit the mind’s antipodes is brilliantly illuminated and seems to shine from within’, he wrote[xi].

Weir Mitchell, considered the father of Neurology, had a peyote experience as well, an account of which Huxley summarises: ‘At his entry into that world he saw a host of ‘star points’ and what looked like ‘fragments of stained glass... Then came delicate floating films of colour… brilliant hues… Gothic tower[s]… all [possessing] an interior light… efflorescence of more precious stones… the architectures… clustering gems, the brilliant and intricate patterns – these, in their atmosphere of praeternatural light, praeternatural colour and praeternatural significance, are the stuff of which the mind’s antipodes are made’ he wrote[xii].

The ‘spiritual truth of light’ was much exploited by the ecclesiastical use of stained glass, which created ‘an effect which resembled precious jewels’[xiii] in order to awe the viewer, be a portal to another world and to perform a story-telling function.

The intrinsically transporting nature of glass continues into modernism with esoteric visionaries such as Rudolf Steiner and noted by Walter Benjamin. But it’s the German Expressionist Paul Scheerbart who’s the source of our contemporary glass architecture. This avant-garde poet and science fiction novelist wanted to create a new glass culture that would transform humanity; a glass paradise, proclaiming in his Utopian novel and aesthetic manifesto that ‘Coloured Glass Destroys Hatred’, ‘Coloured Happiness Only Comes With A Glass Culture’ and ‘Glass Opens Up The New Age’[xiv].

Contrasting with the dystopian realities of contemporary life, he wanted to cover the face of the earth with glass architecture, he wrote ‘as if the earth were adorned by sparkling jewels and enamels. Such glory is unimaginable… We should then have a paradise on earth, and no need to watch in longing expectation for the paradise in heaven”[xv].

This vision was shared by John Ruskin who ‘proposed a project to cover London with a coloured glass dome’ rejoicing in the ‘glowing mosaic of broken colour’ and ‘variegated crystal’[xvi]. But it was Scheerbart’s influence on and collaboration with architect Bruno Taut that was the most fertile. Taut also proposed ‘an ideal world constructed of crystals and glass’, that resulted in the Glashaus pavilion in Cologne, described ‘as a metaphor for spiritual transcendence’ and a ‘carrier of cosmic feelings’[xvii].

Both Scheerbart and Taut ‘embraced the crystalline’ and celebrated ‘stained glass as the genesis of glass architecture’ but ‘replaced any nostalgia for the past with hope for the future’, championing glass or crystalline structures [for having] a positive psychological effect on society.’[xviii]

They and many of their Expressionist contemporaries, including Walter Gropius formed the Glass Chain, a Utopian correspondence group who embraced glass and crystal as recurring motifs with their ‘illusory world of reflections’ and ‘proclaimed the crystal utopia as their ideal’[xix]. ‘In many a dream’, Carl Jung wrote, ‘the nuclear centre, the Self, also appears as a crystal… the crystal often symbolically stands for the union of extreme opposites – of matter and spirit.’[xx] This is pure alchemy.

‘Taut found in glass an inherent ability to defy its own materiality. The translucency of glass negates its material qualities; it becomes in essence, less ‘material’. This ‘spiritualised’ it’[xxi]. The internal secrets of glass remain elusive; it mysteriously defies scientific rationalism. Still technically a fluid while in a solid state - the molecules have a disordered arrangement rather than a rigid crystalline structure. The impossibility of glass, this frozen liquid paradox.

A deception. A fiction. Smoke and mirrors.

Since early utopian science fiction, these crystalline worlds have occupied a part of our consciousness. Science fiction shines a light on our alternative worlds. If we look into our crystal balls using speculative fiction, fantasy, feminisms and fabulation according to Donna Haraway we will be able to propose and realise an alternative future. Mirror-travelling could take us somewhere else through story telling, the creation of wild facts ‘that won’t hold still’ and our ‘future worldings’, as she called them, could be ‘rebellious and hopeful’[xxii].

In Fabrizio Terranova’s film ‘Donna Haraway: Story telling for Earthly survival’ he describes her theory of Speculative Fabulation as ‘A type of “narration” that enables one to unfold new worlds through arousing an appetite for what’s possible [and] what could have taken place).’[xxiii]

I am making correspondences across time and space in this cosmology of entangled researches where my background in Anthropology feeds into this trans-historical excavation of different cultural beliefs in order to create a new one.

Using the material of glass, which can be seen as crushed time itself, seems fitting. With its inherently transporting power and spiritual agency, I am attempting to move alchemically from the material world into the cosmic, psychological and spiritual, quoting from what could be seen as the failed utopian project of the New Age.

Proposing possible pasts and futures in a speculative way, I’m particularly interested in the relationship between spiritual discourse, aspects of female power, and the natural world. And while reflecting on the past, I am looking through the lens or prism of a possible parallel world belief system with alternate power structures.

[ii] Smithson, Robert, ‘Incidents of Mirror-Travel In The Yucatan’, The Art Forum (September 1969).

John Tenniel, from Through the Looking-Glass, and What Alice Found There, 1872.